What are Open Forums?

"We are most aware of the need to focus on solutions and social system change but sustainable relationships are equally or perhaps more important. To achieve such relationships, some of us need to learn how to facilitate and be elders who know and participate in with the various sides, and various roles, inside of themselves and outside in group process. Such elders can turn conflict into fluid and creative relationships where people understand and work together." - Arnold Mindell
Deep Democracy Open Forums are facilitated discussion forums for issues that concern everyone to be publicly discussed.

They aim at forwarding public dialogue and addressing issues of public concern that create polarisation, such as socio-economic issues, issues of race, religion, immigration, gender, sexual orientation, fear or hatred of other (xenophobia, islamophobia, homophobia, anti-semitism), ethnic and national tensions, discrimination, relations between institutions and communities, etc., and at building community by bringing together a diversity of people and points of view.

Open Forums address the need for relationship between people who belong to opposing sides of an issue, by promoting awareness and understanding of the experience of the other, and in this way reducing animosity.

In an Open Forum space is created for:
The key is awareness of the flow of events and communication signals. Noticing subtlest of signals indicating the onset of emotions such as fear, anger, hopelessness, and other altered states, and using them to bring awareness to the feeling experiences in the background, can transform seemingly impossible problems into community building experiences.

The focus of the facilitator is on awareness - helping the world know itself - rather than pushing for change, and noticing what arises from that awareness and the interconnection it creates.

The facilitation of the Open Forum is based on the idea of Deep Democracy, a special feeling of belief in the inherent importance of all parts of ourselves, all viewpoints in the world around us, and all dimensions of our experiences. Deep Democracy adds the feeling and relationship dimension to democracy, going beyond power.

Deep Democracy is the philosophical basis of the Processwork paradigm. Processwork, or Process-oriented Psychology, developed by Dr. Anrold Mindell, is an evolving, trans-disciplinary approach supporting individuals, relationships, groups and communities.

Why do Open Forums?

Social context and issues addressed: In May 2010 the first loan agreement between the Greek state and the Troika, relinquishing sovereignty and agreeing to a series of austerity measures was signed, despite the demonstrations against this direction. Strong public reaction continued in the ensuing months. In this environment of social turbulence we organized the forum to create a space to come together and talk about the implications of entering the IMF on our lives, interact around the different experiences, feelings and viewpoints we had.

Social context and issues addressed: As the economic crisis deepened and people experienced the beginning of the dismantlement of the social state (health care, education, welfare) the level of agony of people rose, as well as the reflection on what was occurring, and on the values upon which they had build their lives. Questions came to the foreground such as: Do we determine our lives less and less? Where do I stand in this situation? Where does my responsibility lie? Where to start? Do we need more voices, more stories? Who am I? Who are the others? How do I create a common space? Meanwhile violence on the streets was escalating from all directions. Extreme right neo-Nazi groups had begun roaming freely in the streets, after their increased percentages in the recent elections, seriously injuring and some times murdering immigrants, or policing neighborhoods. Extreme left groups who believe that social change comes from using violence and fighting the state institutions, clashed with the police in every demonstration that happened, accompanying the general strikes. The police, following orders to dissolve the demonstrations, used increasingly excessive force injuring people. Citizens who had never experienced the force of the police used in this way against them were in a state of shock. Athens felt like a war zone. In this environment of escalating tension we organized a forum to make space for the different feelings, experiences and viewpoints, and the interaction between them, inviting people to come together to talk about what we were experiencing in our daily lives and interact around it, in an attempt to foster awareness of the deeper feelings and create direct non-violent relationship interactions.

3rd Forum April 2012
Inequalities? Meeting one another in our antithetical experiences
Athens

Social context and issues addressed: The continuing implementation of the austerity policies augmented the existing inequalities between people, and created new ones. Some people were still able to continue their lives by cutting back but still having their basic needs covered, while other peoples' survival was being threatened. A sense of depression and hopelessness was present, for some arising from the difficulties to survive, for others from the sense of inability to affect the political process toward a direction they felt would be more just. For some of those whose livelihood was not threatened a sense of guilt was present, as well as fear of loosing the safety they still had, while for others, life appeared on the outside to continue as usual. We organized a forum to create a space for people to share their experiences of inequality and feelings about these, whichever side they were on, and interact around them.

4th Forum November 2012
Exclusions exist between us and inside us: Who excludes whom?
Athens

Social context and issues addressed: In the period following the previous forum, tensions continued to escalate. Neo-Nazi groups continued to roam the streets of Athens attacking immigrants, and had begun attacking gay people. People living in Athens moved around in the city in a state of fear and rage. Minor conflicts exploded into angry interchanges on the streets, in the public transportation system, at work environments. People were on edge, and in fear of their own violent reactions in response to their fear and rage. More and more were facing financial difficulties. Panic attacks, anxiety and suicide rate was on the rise. We organized this forum to bring people together to talk about, and interact around our experiences in our daily lives, our feelings and differing positions and viewpoints on the multiple forms of exclusion we experienced and created for others and ourselves.

Social context and issues addressed: Five years into the imposition of austerity measures, accompanied by excessive taxation, creating huge debts to the state, we were faced with a deepened social and economic crisis, which was turning into a humanitarian crisis for many people. Hundreds of thousands of people had lost their source of income having been fired from their jobs, or lost their small businesses, some people were already living without electricity (an extra tax was imposed through the electricity bill that people could not pay) and some without water, and many were depending for their food supply on social food banks that were beginning to form, or on common meals organized by various voluntary social groups and by the church. In this social and economic environment many people were faced with having to leave the country to find work, while others with having to make a choise to leave the country for a chance to develop their potential and fulfill their dreams, or stay to work for the betterment of the country, tyring to create new social and economic structures. These decisions created huge inner struggles, such as feelings of guilt for disserting loved ones and the country, as well as relationship tensions between family members, friends, colleagues, and members of different social groups. We organized the forum to make space for the multiplicity of these experiences and the interaction between them, feeling more and more the need for and the importance of such a space, and of attempting to facilitate the interactions and relationships between opposing interests and energies from a feeling perspective that cares for the whole.

6th Forum March 2014
Do we live in the same neighborhood?
Tavros, Athens

Social context and issues addressed: The forum was organized in collaboration with the Social Services of the Municipality of Moschato and Tavors, who were looking for a way to address the depression and sense of isolation created by the sudden extreme changes in people's lives, who found themselves struggling to survive as a result of the austerity measures taken to deal with the country's economic crisis, but also the rise of aggression and violence appearing in people's relationships with one another, both in private and in public, and with the state services.

Open forums around the world

pdf file with information on open forums around the world

During the 3rd IAPOP Conference in Zurich, Switzerland, the Open Forum preparation team from Greece was awarded the Worldwork 2012 Award. We were moved and inspired by the support of the international processwork community.

Photos from the Worldwork 2012 Award evening 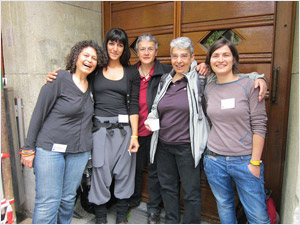