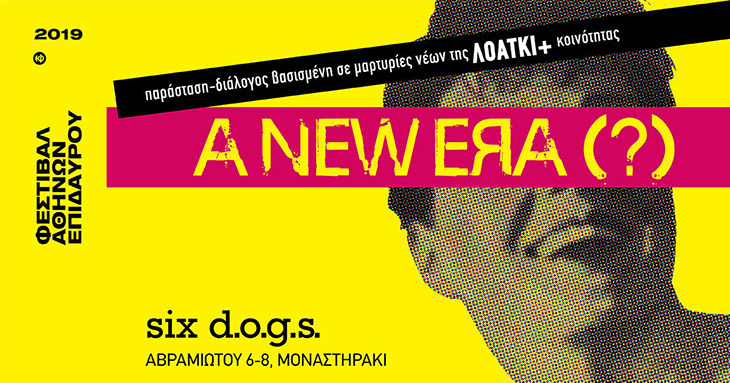 Alexandra Vassiliou and Vera Lardi designed a performance-dialogue for the Athens and Epidaurus Festival.

How do gay, bisexual and transgender people experience homophobia, biphobia and transphobia? How is the new generation of LGBTQI+ people in Greece thinking and processing things? Have the recent legal reforms changed the overall situation? Are we really on the cusp of a new era - an era which truly acknowledges people's right in free self-definition?

Stories by members of the LGBTQI+ community come alive in a unique bar-theater performance. Within the enchanting cocoon of a bar, we share the illusions of the night. Language, music, dance and drag shows, all merge into a puzzle of narratives and stage action.

A New Era (?) connects theater with social intervention. Narrators, actors and audience are methodically led into parallel discussions about the topic in question. Collectively, they shape an experiential performance based on real-life narratives which gradually leads the audience into being emotionally and verbally responsive through an open debate. The intention is to listen to the voice of the spectator in all its diversity and multiplicity.

Specializing in the so-called 'community theater,' Vera Lardi (actress, theater researcher and psycho-dramatist) and Alexandra Vassiliou (social psychologist, with long experience in issues of social marginalization of LGBTQI+ people), collaborate with Margarita Kastrinou (theatre researcher and actress) and jointly create a performance about one's personal experience of exclusion, regardless of gender and sexual orientation, and about the universal need for genuine connection. The night is expected to help in this captivating endeavor.

Co-funded by Greece and the European Union